Oftentimes when (community) gardens are appreciated it is for fulfilling a temporary need. They replace vacant lots, turning illegal trash pits into something pretty that increases property values. They green otherwise dull, industrialized, cities and create a sense of community where there is none. Victory gardens help socialize children into a nationalistic project of civic engagement while reinforcing an ideology of The Home Front of war. They give people an individual source of food–and something to do–while unemployed. They can turn into microfarming, which increases food supplies when farmers are drafted to war. Gardens in schools are tools for teaching children cultural values of work, perseverance, and self-sufficiency. They provide cities with a way to assimilate foreign immigrants and former farm workers alike.

Then the gardens are paved over and are turned into apartment buildings, storefronts, or even parking lots as the economy shifts.

This is the story of the community gardens in the United States, told by Laura Lawson (2004) from the present all the way to the 1890s. The reoccurring theme of the last hundred thirty years is that gardens appear, they serve a social, cultural, and economic purpose, and then are replaced by “better uses of land.” Perhaps, if they are useful in so many contexts, they are in fact the best use of that land and should not be taken for granted. But in order to explore this issue, much less change cultural mindsets, gardens need to be made visible. People need to know of their existence as a collective, not as just disparate plots of land. This is the objective of Professor Craig Borowiak at Haverford College’s project to map all the community gardens in Philadelphia versus demographic data. While assisting Professor Borowiak in this project I was bitten by the community garden bug and since returning to Portland, OR, I have volunteered to produce similar maps for the Portland Bureau of  Parks and Recreation.

The following maps are the fruit of that project. They display the locations of the 55 community gardens in Portland (as of 2018) compared to demographic data from the American Community’s Survey 2016 5-year estimates displayed in terms of block groups. There do not appear to be consistent patterns between these maps, which means that the gardens are (hopefully) serving the population evenly. 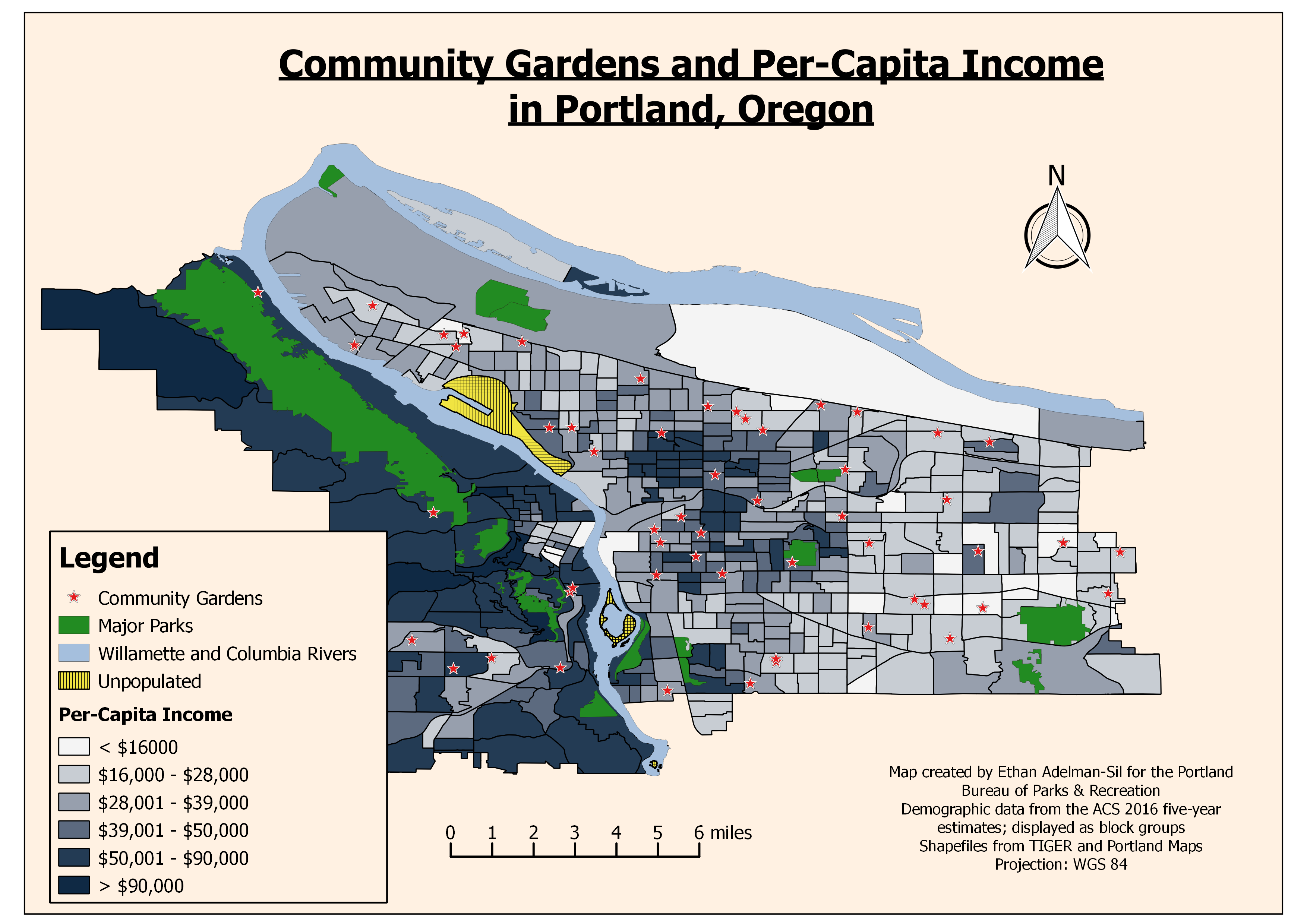 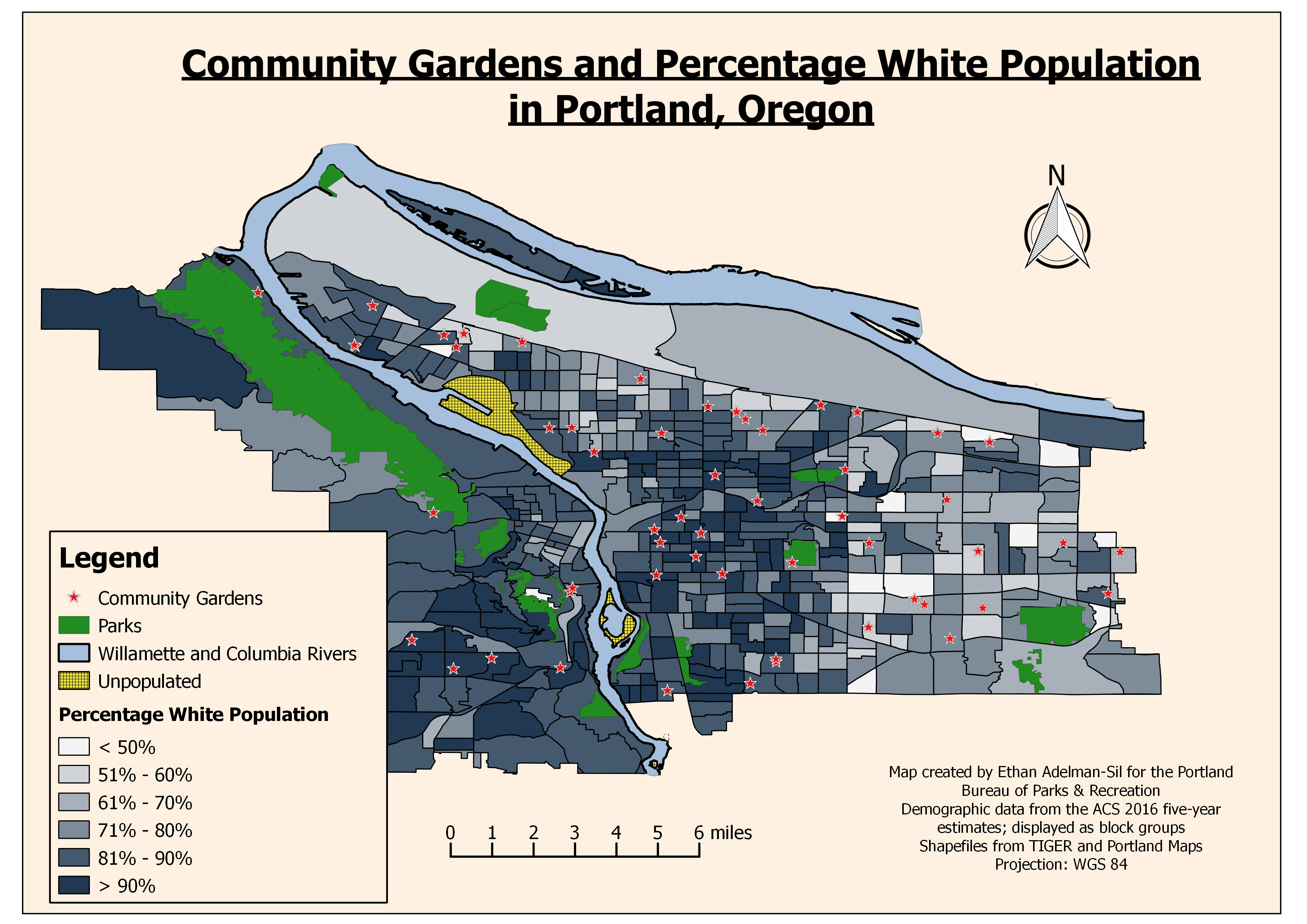 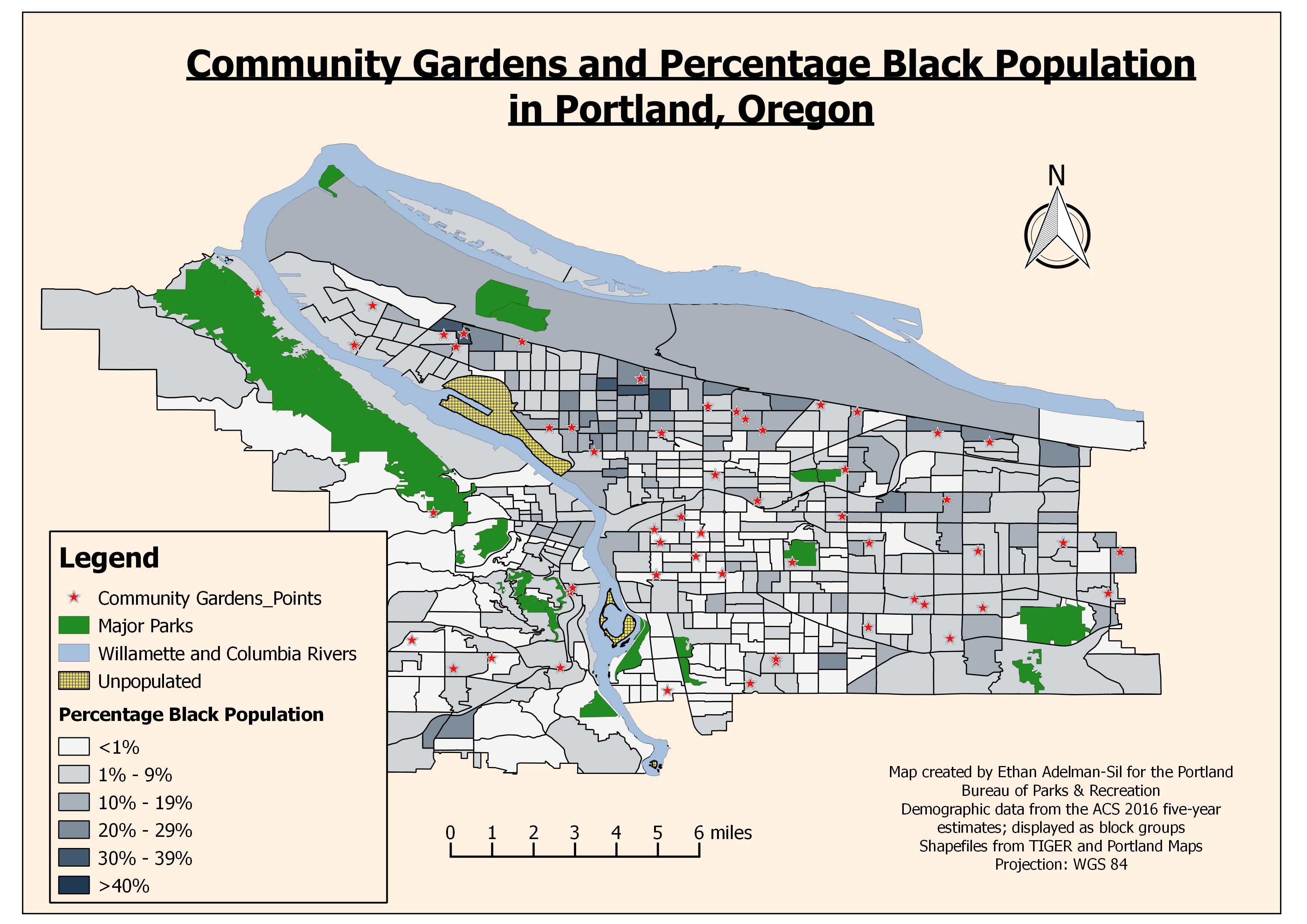 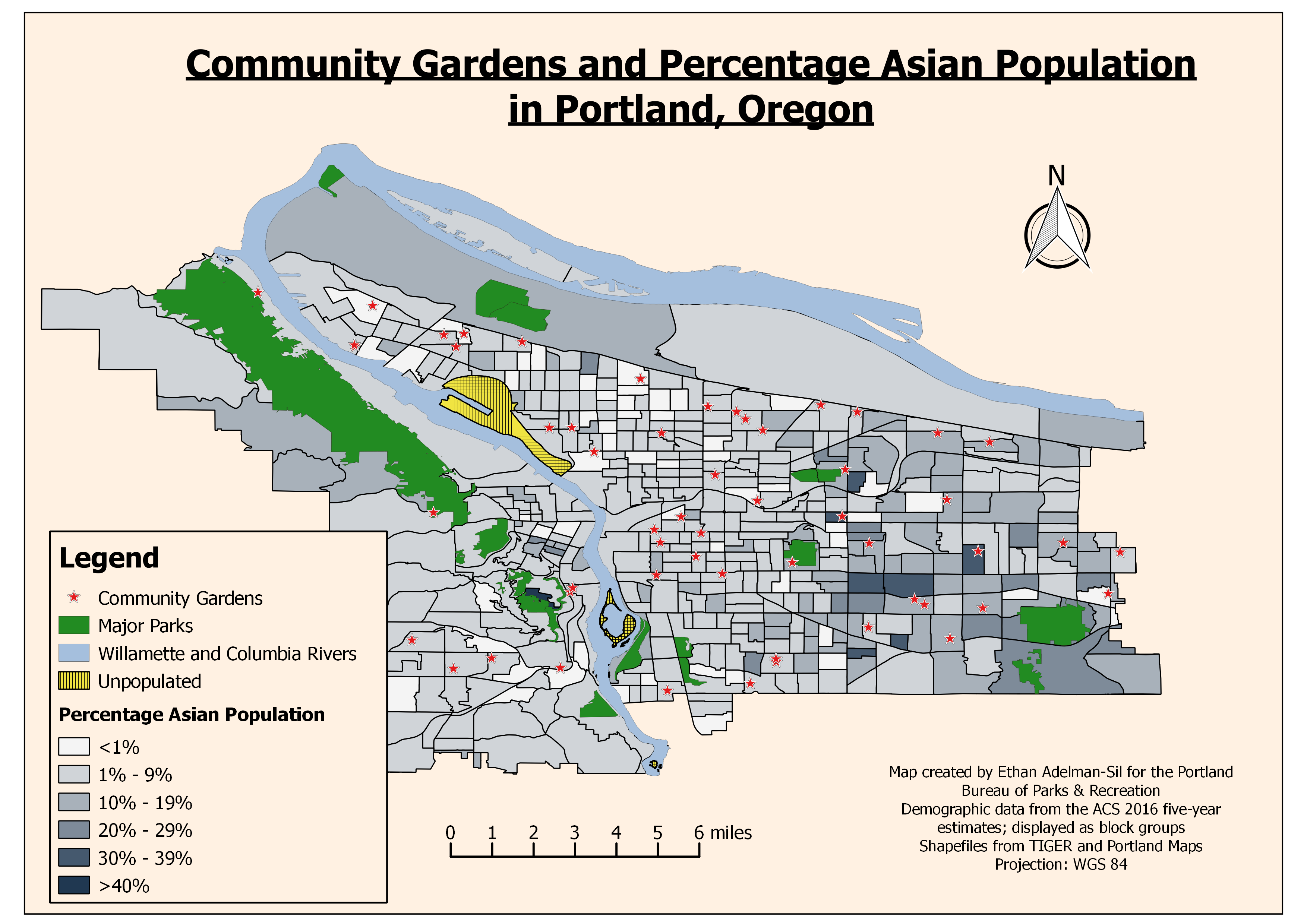 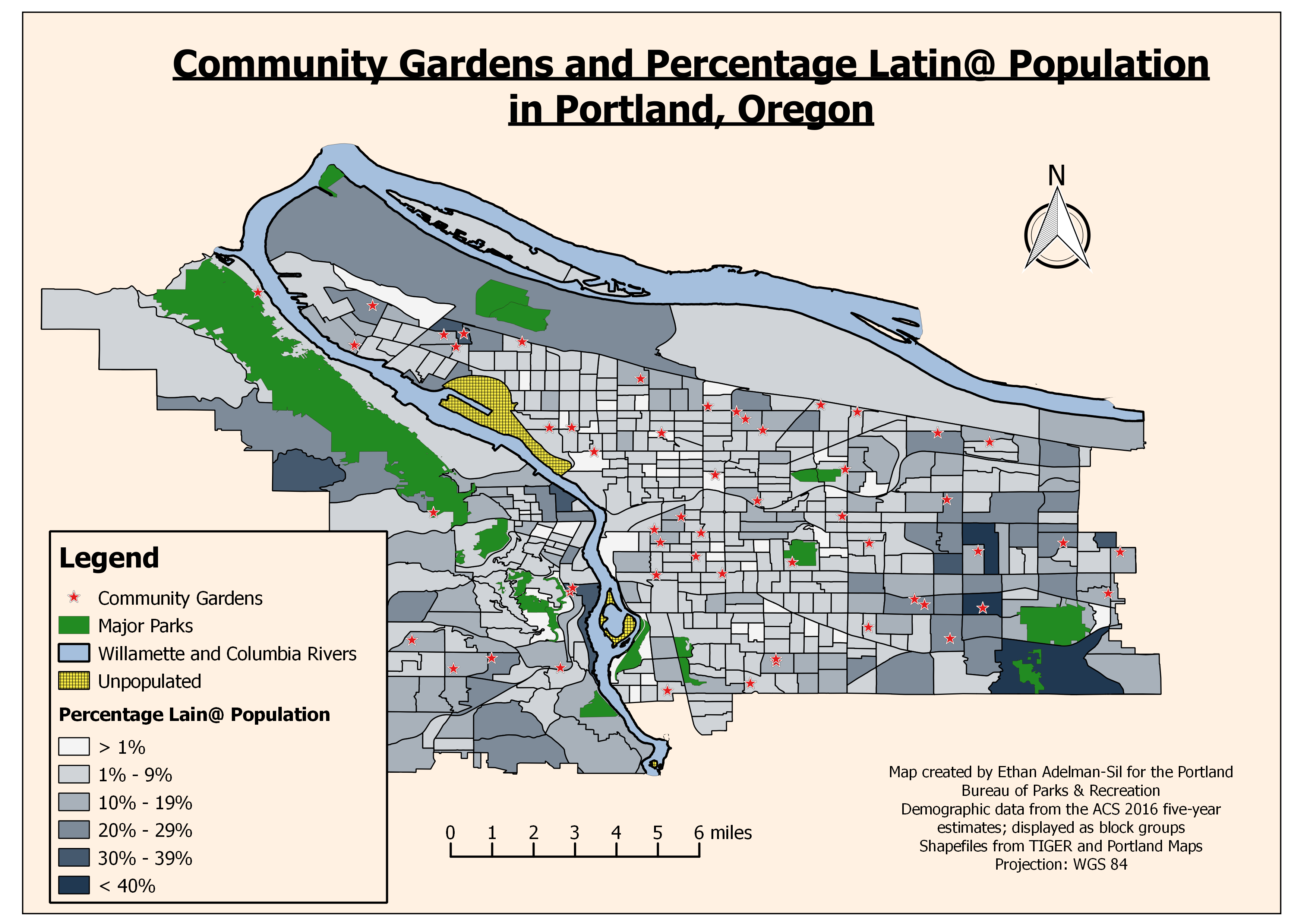 This website seeks to be an online space to generate ideas and discussions, especially those related to politics and society.